The ScoutMaster who changed my life by Rulon Skinner 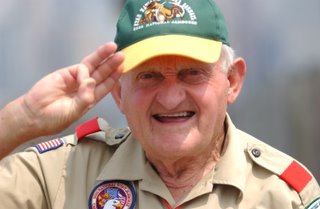 The Tuesday after I was twelve years old, Dad announced at the breakfast table that come evening after the milking and chores were done he and I would go to Boy Scout meeting and I could become a boy scout.
Dad was assistant scoutmaster at the time to Frank Booth, formed Three G Council was headquartered in Safford. Previously the area had been part of the Theodore Roosevelt Council headquartered at Phoenix, Arizona. What dad didn’t know and I didn’t want to tell him was that I didn’t want to be a Boy Scout, and had no intentions of becoming one.

I had heard at church and school what Boy Scouts did, and I didn’t want any part of it. I had been told that there were boys from 12 to 18 years of age in Troop 120 and the older boys made it tough on the younger boys. I had been told that the older boys were boy leaders in the troop and when anyone made a mistake or goofed off in any way–old or young– that one of the leaders would yell ” Belt Line!” Immediately the boys(about 30 or so) in the troop would form two lines, whip off their leather belts, and spread out far enough so each Scout could get a good swing with his belt at the one who had made a mistake or goofed off. The boy at fault would run as fast as he could through the belt line with boys swinging their leather belts hitting his rear as hard as they could. If any boy refused to actively participate in the belt line, then he went through the belt line. If the boy at fault refused to run through the line, he would be held in a standing bent over position while every other boy in the troop hit him hard on the rear with his leather belt.

I also understood that the Scouts in Troop 120 did a lot of marching in preparing for the day they would be in the army. The year was 1943. The United States had been in World War 2 since Pearl Harbor Dec. 7, 1941. In 1943 the war was not going well for the United States in the Pacific. There seemed to be the prevailing feeling that most of us boys would be in the army before the war ended. The thought was we should be as prepared as possible.

I didn’t like belt lines because I wasn’t as big and as tough as the other guys at my age, let alone all those older guys. Besides, I was a farm boy and didn’t know much about marching and drill. I could see myself making endless mistakes marching and because of them have to go through the belt line.

I didn’t say anything to Dad at breakfast the Tuesday after I turned 12 years old because I knew he was assistant scoutmaster and wanted his son to be a Boy Scout. I worried about it all day. By milking and chore time I had finalized my plan in mind so I wouldn’t have to be a Boy Scout. I hoped it worked.

My plan was simple and workable — at least in the mind of a 12 year old. I would do my share of the chores, as usual but when they were nearly completed I would lag behind Dad when he went from the barn to the house. Then I would hide in the secluded hideout I had at the time in the haystack (no bales of hay) where the cows had gotten in and ate up under the stack. Enough hay from above in the stack had fallen over the opening so there was more than enough space for a 12 – year old boy to crawl in, hide, be able to see out, but no one knew there was a secret hideout there. My plan was to stay in my hiding place until Dad went up the road in the Motel T Ford past the haystack to Scout Meeting. Then I would come out and stay home with Mother as I had up until now.

Scoutmaster Booth made a mistake after introducing Mr. Perin. He asked him if he had said anything to us. Bob Perin sprang to his feet, said, ” Yes, put the boys on the floor sitting in front of the stage and I’ll be back in a minute.”

The next we saw Bob Perin, he opened the curtains, dumped a box of rope in the middle of the open, empty stage, used the ropes to tell three stories of how Scouts knowing knots and the hitch to tie up the great magician Houdini. Two other former Scouts had saved their lives in war with the proper use of knots and ropes.

I sat spellbound as Bob Perin opened the whole new world of Scouting in my mind and heart. We repeated the Scout oath to end the meeting. I’m sure I would have not been a scout very long and certainly never a professional Scouter!

Bob Perin had made such an impression on my boyhood mind that I determined to be a scout and craved for the opportunity to just be around him. From that point on, it didn’t matter about belt lines, marching, the fact that my patrol leader, Max Hancock, flunked me three times in my tenderfoot requirements before I knew them well enough to satisfy him, I wanted to be a Scout and be a good one. I never wanted to miss a Scout meeting.

After two or three good years of Scouting with Scoutmasters Booth, Allred, And (Bernard) Clawson, Bob Perin knew about me. He knew me as the boy who ate, drank, and lived Scouting more than any other boy in the entire council.

About the time I was 14 or 15, I went to Bob Perin’s small Council Office in Safford on the second story of the only bank building in town and volunteered to do all his janitorial work for him. I just wanted to be around him all I could. He accepted and tried to pay me. I refused, telling him I was doing my Good Turn and a Scout couldn’t take pay for doing a Good Turn. He eventually got even a little when he brought by the house and gave me a small pup tent and sleeping bag which were war surplus and told me he couldn’t take them back.

When I turned 15 years of age, I applied for a summer camp staff position to be around Bob Perin. He took me and trained me to be a good camp staff member. Long before I was old enough (according to Boy Scouts of America standards), he had me directing Camp Snow Flats, the Council’s Summer Camp on Mt. Graham, in his absence and being assistant camp director when he was there. He gave me the feeling he trusted me and knew I would try to do things just the way he would do them.

By this time I had decided that I wanted to be a professional Scouter like Bob Perin after my mission and graduation from college. I told Bob Perin of my plans and he tried many times to talk me out of it. He would tell me about the long hours, long weeks, frequent transfers to a new council, and low pay. The more he talked and the more I watched him perform as our Scout Executive, the more determined I was to become a professional Scouter!

I enjoyed my 15th year as patrol leader of the Pine Tree Patrol. By the time I was 16, our patrol was outshining the other patrols so much that the scoutmaster had a problem on his hands. How could he keep the rest of the troop excited and active in Scouting. He finally decided with the troop committee that I would be “forced” to become an Explorer Scout–meet with the Explorers and give up my patrol! I was very disappointed. However, by this time I was a senior in high school, and very active in high school activities. Besides I was Council Reporter for the Graham County Guardian.

One of the experiences we had as the Pine Tree Patrol was establishing that a good Scout does not curse or swear. It seemed like most of the boys and I didn’t want my seven 12-year olds to continue to curse or swear. I had read in a Scouting book that the way Baden-Powell, founder of Scouting, taught boys not to swear was to establish a rule against it in the troop. If any scout in the troop cursed or swore, then the rest of the boys in the troop were to hold him down until a glass of cold water had been poured down one of his shirt sleeves. On one occasion, I talked with the Pine Tree Patrol about adopting the practice in an effort to eliminate cursing and swearing from the lives of any of our Scouts. They all agreed. They all agreed that it would be anytime–not just at Scouts, but school, church, play. It only took two or three occasions when someone in the Pine Tree Patrol slipped and cursed or swore and the other patrol members held him down, ignoring pleas for another chance and poured cold water down his sleeve to eliminate cursing and swearing from all of the boys’ lives.

Our troop went on troop camps several times during the year. I remember a special experience on one of these camps held near the base of the Graham Mountains. It was a Friday evening and Saturday overnighter. We got to camp and put out our sleeping bags. I don’t remember using tents most of the time. It seldom rained in Arizona. On this camp out, the special part for me came at the end of the Friday evening campfire. We sat on large cottonwood logs in a circle around the campfire ( about 20 scouts ). There were songs and stories. Then near the end, Scoutmaster Frank Booth stood to give us a Scoutmaster minute ( something to think about as we went to bed ). Frank was an older man and I didn’t know it until years later, but had not been active at church or in the Scouts until just before I became a Scout. He previously had bad problems with smoking and drinking. He stood at that night as our Scoutmaster and in his crude, rough way gave a scoutmaster’s minute that I never forgot. It didn’t even take a minute. He said ” Before very long you boys will all have ot make decisions–important decisions– that will affect your lives forever. Among the things you will have to decide is whether you will smoke or drink. I’m telling you– DON’T EVER DO IT! When you want to know why you should not smoke or drink, don’t do it because old Frank said so!” That was it!

Bob Perin  and a group of talented volunteers created “The Boy Scout Show” for TV in the mid 1950’s to help spread the message of the Boy Scouts of America. The show ran for one season (13 episodes) and played in various television stations across the United States.

The original 16 mm films for the 13 episodes have been converted to digital format and are now available for viewing.